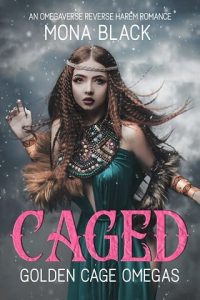 Alphas and omegas are considered non-humans. We’re considered animals, some of whose traits we share. Furry ears and tails, anyone? Oh, and also mating cycles.
That’s right.
Fun.
Not something I thought I had to worry about. See, I thought I was a beta. I thought I was human. I thought I was safe.
And things only get worse from there.
My parents are killed by a pack of rogues and I run away, heading to the city—but there I’m captured and sent to the Golden Cage.
A place where omegas are kept to be sold to an alpha pack.
To the highest bidder.
I came to the city to find a gang of boys I met many years ago, to beg them for help, but instead, I’m being sold to an unknown pack, the choice not up to me.
What are the odds that the gang of boys I once knew, all grown-up now, would bid for me?