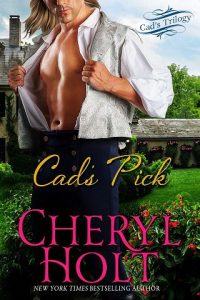 The bestselling author, Cheryl Holt, delivers the second novel in her new and dazzling ‘CADS’ trilogy.

Warwick Stone is a rich, handsome cad. He revels in outrageous ways and enjoys his reputation as a scoundrel. But when his father suddenly inherits the family’s earldom—an elevation that was completely unexpected—Warwick has to marry in a hurry and start siring some heirs. As the consummate bachelor, who never expected to wed, the whole notion of matrimony is exhausting. He figures he’ll quickly pick a fetching debutante with a good dowry, and he’ll become a husband by expending as little effort as possible.
Wilhelmina Dobbs had an odd childhood. Her father was a famous artist, but a flawed and damaged man. As a girl, she followed him across Europe, standing in the background as he painted masterpieces and disgraced himself with his extravagant habits. After his death, she retired to the country to live quietly and paint too. After watching her father regularly disgrace himself, she’s sworn off all men. She can’t imagine ever marrying and intends to remain a spinster.
When Wilhelmina crosses paths with Warwick, sparks fly and passion ignites, but his corrupt reputation precedes him. He represents everything she detests in a male, but he’s spoiled and determined, and he always gets exactly what he wants. When he decides he wants Wilhelmina, how can she resist?
Cads make the very best husbands…