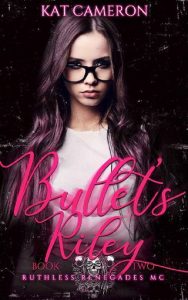 “Being beaten and mentally abused by the man that is supposed to love you until death do you part is not fun. Carving him up like he was a pumpkin was awesome though.”
“Reese now is not the time to be putting your two cents out there.”

Reese has been here for as long as I could remember. She was her own person sharing my body. Being my strength when I needed it and my best friend when I had none. I thought we would be okay once we were free of the vile men that thought ruling my life was a good idea. But to say it has been easy would be a massive understatement. She was all I had until I bit the bullet. Quite literally actually. Bullet to say the least has been bulldozing his way into our heart. Putting our trust into him, being a total stranger is harder than I thought it would be but he is helping me realize I am not alone in this world.

All it takes is one person to ruin this little bubble we called life. Bullet’s past comes back with a vengeance and when it does I don’t know if I will come out of this alive. If I do come out alive will we be the same people, we were before?
Jump into the world of The Ruthless Renegades dirty talking alpha bikers that would do everything to keep their women and their families safe plus a happy ending to go with it.
Recommended for 18+. This book contains physical and sexual abuse, death, sexual situations, violence and strong language.