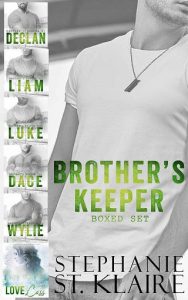 The O’Reilly brother’s are off the grid and taking things to the next level. Someone is coming for them… all of them. Wiley O’Reilly will break from the pack to save his brothers, and the woman he loves to hate, in the epic conclusion that will make you question everything you thought you knew.

Just when you think the world of Brother’s Keeper Security can’t get anymore tangled— prepare to be buried beneath an avalanche of secrets and lies.

Brother’s Keeper V: Wylie (#6)
** Wiley **
Eva Valdez is intelligent, gorgeous and fierce… a lethal combination. And now she’s missing.
The fearless heir to the infamous Valdez cartel has been working undercover with the brothers to bring down her corrupt family and destroy her father’s legacy of death and destruction. But his ties run deep… deeper than any of them could have imagined. Following the dangerous trail leads to dirty dignitaries and greedy government officials, who will keep their secrets silenced at all costs, leaving Eva and the brothers caught in the crosshairs.

Wiley will sacrifice everything to clear his family’s name and bring Eva home where she belongs… with him.
Everything has been leading to this moment. Every case, every lie… unfolding before them as the truth surfaces from behind the grave.
Amidst murder and mayhem, Eva and Wiley fight to avenge the O’Reilly name and uncover a threat that could destroy them all.