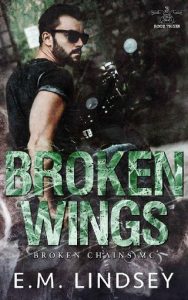 The night Kicks woke in the hospital with fresh scars and a missing eye was the night he promised he would never, ever let himself be vulnerable again. And as the Road Captain of the Broken Chains MC, he managed to keep that vow for five long years. But the universe has different plans for the biker when his President sends him on a mission to escort the rabbi, Jude Burns, who is now under the protection of their club. Kicks doesn’t want a babysitting job, but he’s not sure what to think when he’s faced with a mouthy, stubborn man who seems far more sinner than saint.
Kicks has never in his life felt more tempted to break his promises, because with this man, his vulnerability feels like power.
Jude Burns’ world is turned upside down when his brother gets involved with a motorcycle club, and by proxy, he finds himself in danger of being killed. And after being shot at on the road, and just barely escaping a fiery death, Jude isn’t sure where he belongs. He’d spent his entire adult life dedicated to his service as a rabbi, after all, even when the temptation of life outside called to him louder than ever.
And Jude knows the decision would be easy if it weren’t for Emilio—the dark-eyed Road Captain who makes Jude question every vow he’s ever made. Jude was pretty sure he wasn’t destined for love the way his brother was, but when Emilio falls to his knees and asks him to stay, he finds it’s almost impossible to tell him no.
Even if it means walking into the line of fire to save a man with ragged, broken wings.