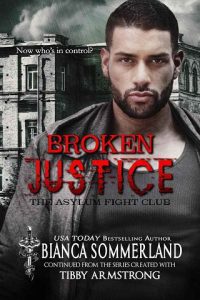 Gun-for-hire River Capaldi’s assignments at The Asylum should be pretty tame:

Only one problem. No one’s rolling out the welcome mat until he proves he isn’t a threat to the found family made up of a ragtag collection of fighters and their men. Thankfully, he’s got some strong connections to smooth the way. And their trust comes with a few perks.

-His very own sub to protect.
-On-site accommodations.
-And front row seats for some sexy drama.

The longer River stays, the more drawn he is to this safe haven in the center of a brutal world. A few rounds in the ring becomes a seductive dance. Not a life he can indulge in long-term, but for the men he begins to think of as friends and lovers?
He’ll sacrifice just about anything to keep it safe
Tattoo artist-in-training and non-toxic twin, Tayden Powell, enjoys the spot he’s earned on the outskirts of The Asylum’s core. Sure, there are times he wouldn’t mind joining the inner circle, but at least he isn’t neck deep in the danger they constantly face.

Until one wrong step has him drowning in it. And needing his very own merc bodyguard.
Temporary collars are coveted prizes among The Asylum subs, because they often lead to something more permanent, but Tay can tell River’s got one foot out the door. And there’s no way to build anything together on a foundation of secrets he can’t share.
For now, Tay can have a bit of fun. Get a taste of what he’s watched from the sidelines. So long as he follows his short-term Dom’s one rule.
Don’t fall in love.