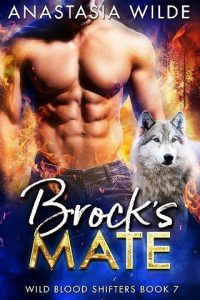 He used to be the one who saved people.
Now he’s the one they need to be saved from.
Until fate sends him one last out-of-control shifter—and he’s her only hope…

After years of healing other people’s pain and darkness finally drove his wolf over the edge, Brock left his job, his family and his calling behind, ending up on the fringes of the Wild Blood crew. The one who doesn’t really belong; the one whose wolf is too wild, whose heart is too numb to ever find Ms. Right—or even Ms. Right Now.
Especially if she’s a shifter in trouble. Been there, done that, tried to fill the holes in their hearts until they bled him dry. He’s done.

All her life, Desi Phillips has been a magnet for bad situations and men who want to trap her in them. Luckily for her, her penchant for getting into trouble is matched by her talent for getting back out of it and disappearing. That is, until her latest boyfriend turns her into a freaking out-of-control werewolf, setting ex-shifter-government agent Brock Reilly on her trail.

Desi’s not like the needy, clinging women Brock’s fallen for in the past—in fact, her only goal is to get as far away from him as possible. But to keep her from getting imprisoned as a rogue, he has to chase her down and persuade her to stay with him long enough to learn to control her wolf.
Could Desi’s worst betrayal turn out to be the best thing that’s ever happened to her? And has Brock finally found a woman he can save—one who’s willing to save him back?