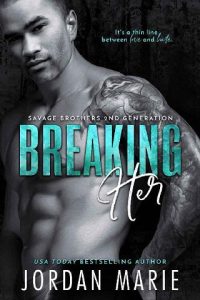 We were friends and I crossed a line I never meant to.
Now, we’re both forced to deal with the fallout.
Thomas “T” West has struggled his whole life.
It was a silent struggle that few understood.
It left him content to live in the shadow of his big brother.
Except when they both wanted the same woman.
Thomas thought he was finally being chosen first, that the issues with his speech didn’t make him less in her eyes.
He was wrong. So wrong.
When he saw Lyla, he was nursing wounds that touched his heart, but also his pride.
He knew it was a shit thing to do, but he used her.
Lyla made him feel normal, like he could do anything, and a man can get addicted to that feeling.
He shouldn’t have taken her to bed. He knew it, but he couldn’t stop.
Lyla Ford fell in love with Thomas almost at once.
She knew him as the quiet guy who was good to her and made her feel beautiful.
If she had known he was a biker, or why he was truly attracted to her—she would have kicked him in the balls and walked off. The truth always comes out.
Too bad that’s when Lyla found out she was pregnant.
Now, her dad is calling for blood.
She doesn’t want a club war.
Having her dad’s club go against the Savage MC would be bloody and she doesn’t want to be the reason for anyone’s death.
That leaves her with only one option.
Claim the man she despises as her old man.