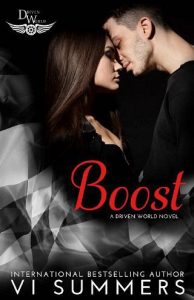 Vi Summers’ Boost is a sexy, high-octane, opposite’s attract romance written in K. Bromberg’s Driven Worlds project.
Rafael Ortiz. Street King, and broken soul.
Living a life fueled by illegal racing and women, he was cocky enough to believe he would never be brought to his knees.
That was until a mystery mamacita set foot in his world at two AM.
She proved him wrong with a single smile. Left him hungering for more.
Had him vowing if he ever saw her again, he would claim both the win and the woman.
Gorgeous, confident, and tenacious, Greer Landon built her empire from the ground up.
Now the PR representative for the Colton Donavan Boost Foundation, her world as she knew it ceased to exist the moment her new client stepped through the door.
The one that devoured her with a single look.
The one she’d fantasized over.
The one destined to break all of her rules.
Rafael Ortiz.