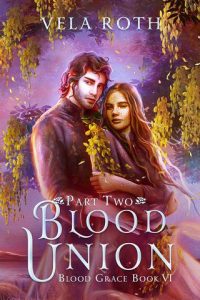 An ancient magic will put their love to the ultimate test.

When Lio brought Cassia to the land of their allies, he believed nothing would threaten her or their fated Grace bond. But a nameless enemy has ensnared her in a conspiracy reaching as high as the Imperial Court. With the Empress out for Cassia’s blood, will Lio abandon his path as a diplomat and unleash his fangs?
Although Cassia is now a fugitive, she can’t flee to safety until they uncover the secret that could change the fate of two continents. Their path leads into a treacherous desert where long-forgotten magic threatens to tear her apart from Lio forever. Can she find the hidden power within herself to survive?