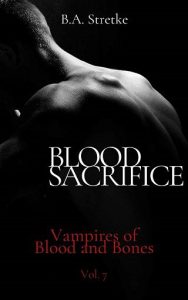 “You can’t report this, Theo.”
“I will,” Theo stated defiantly.
“You won’t,” Bastian stated.

Agent Theo Hawke arrived in Mt. Pleasant, not entirely sure what he was going to find. His superiors sent him to investigate the veracity of a letter they received accusing the Sheriff’s Department and Louis DuCane of all manner of crimes and cover-ups. The letter also contained pretty wild accusations of the supernatural. The outlandish claims colored the view of the entire letter, but the government wasn’t going to turn down a chance to get a peek behind the walls of Louis DuCane’s palace and see what makes him tick. What Agent Hawke didn’t expect to find was a world so much more complicated and dangerous than he could even imagine, as well as the hottest man who ever walked on two legs, Bastian DuFort.

Bastian DuFort, known to those below him as “General,” has worked for Louis DuCane for a long time. He’s a problem-solver, a soldier, and a fixer. If Louis has a problem, Bastian is at the ready to clean it up. When the Feds start poking their noses around Mt. Pleasant, Bastian is the first call Louis makes. His job is to make the problem go away with as little trouble as possible. What Bastian doesn’t anticipate is that the Federal Agent in charge is not just some cop; the man is his fate-destined beloved. Bastian can’t just wipe his mind; he can’t just make the man go away. This man is his forever.

There is a great darkness coming down on the city of Mt. Pleasant, something darker than Coven DuCane can even comprehend. Bastian and his beloved will find themselves caught in the middle. Can Bastian keep Theo alive long enough to make him love him?