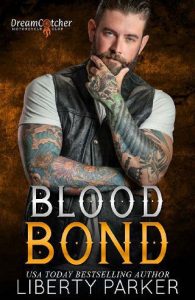 Malice is the chosen enforcer for the DreamCatcher Motorcycle Club. He will do whatever it takes to keep the club and his family safe, by whatever means necessary to accomplish this. He was content with life until Jessia entered. She may have years of damage by her brother’s hands to overcome, but he’s on a mission to do whatever it takes to prove to her that she’s nowhere near broken. He’ll stop at nothing to help her find her revenge.

Jessia never believed she’d escape captivity. She firmly believed she’d have to take her own life to get away from her brother, Jeremiah. But she knew that if she did so prematurely, there’d be no one trustworthy to care for Ella… her niece. Once Texas and Malice enter her life, her way of thinking and living changes. She can finally see happiness in her future and feels joyful emotions she’d once buried.

Texas always knew growing up he would end up living a life less than what is considered and perceived as a traditional lifestyle to the masses. He has a hard shell that is next to impossible to penetrate, that is, until he found a family with the DreamCatchers. Malice became his most trusted friend and confidant, he gets Texas like no one else ever has. He knew that Malice would share his life one way or another… and that all came to light once Jessia entered the picture. Now, he has dreams of happily ever after with the two people who have come to mean the most to him.

When the trio believes Jeremiah is their biggest threat, a new one rears their ugly heads. Can the three of them survive this? Or will it become the straw that breaks the camel’s proverbial back? Is this new enemy a big enough threat to harm the DreamCatchers, or are they strong enough to stand united and defeat their new nemesis?
One thing can be said… this is going to be one hell of a bumpy ride. Strap your helmets and rev your engines. It’s time to take a tour with these ruthless men and women.