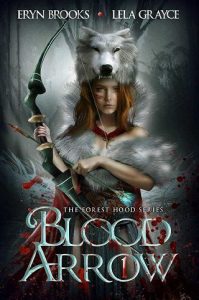 There’s safety in the forest.

Arrow of Loxley isn’t the simpering lady of court she pretends to be. Since her father left to fight in the war, the facade is one she must abide by while she, and her cousin Will, are wards of the King.
Yet, finally, peace talks have begun between King Rusalko and King Graeme. As a sign of good faith, twelve ladies from each court will travel to the opposite kingdom to learn their ways and join their society.
Through the trees, Arrow witnesses Bruralians burying the body of her cousin. Little do they know, Will isn’t dead. The fact he survived must remain a secret, or the Bruralians will come for him again. When the matter is disregarded by the King, Arrow takes it upon herself to protect Will.
While a war veteran helps Arrow get her cousin to safety, she discovers there is more to the war than either kingdom let on. Witchcraft. Shapeshifters. Bloody massacres. Violent beasts. The real battle is for the title of Alpha, and wolves lurk in plain sight.
With the truth revealed, Arrow ponders where her loyalties should lie. Questions morph into icy resolve. Now, she will stop at nothing to protect those she cares for… including defying a King or three.