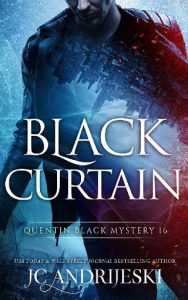 Black and Miri host the seer wedding they dreamed of, the one they planned before that mess in California ended with one of Black’s best friends dead.
Officiated by “oldest soul” Dalejem, with his individually prepared seer hallucino-cakes, the seer wedding promises a night of crazed debauchery and mystical visions, wanders in the desert, prescient glimpses of the future. Black promises Miri no one will get hurt, that it’s all in good fun. Everyone will have sex, drink until they pass out, bake in the resort’s jacuzzi, have deep discussions, and laugh like loons while they celebrate the final ritual before Miri and Black ride off into the sunset.
But things don’t go that way.
Minutes after Black and Miri ingest the final cake, unwanted visitors crash the party.
Black and Miri find themselves inside a grim, centuries-old puzzle, a mystery filled with death and black magic, murder and tragedies from the past.
Locked inside with no way out, they have no choice but to solve it if they ever want to see their friends alive again.

THE QUENTIN BLACK SERIES encompasses a number of gritty urban fantasy and paranormal mystery arcs with science fiction elements, starring brilliant but dangerous psychic detective, Quentin Black, and his partner, forensic psychologist Miriam Fox. Follow Black as he solves crimes, takes on other races and tries to keep his and Miri’s true identities secret to keep them both alive.