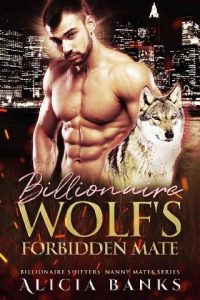 One assignment and both of their lives were never going to be the same again.

Brenda:
Noah was the enemy and when I heard that I would be working for him, I wanted to run away.
Noah was not just a Royal Wolf, but the Alpha’s half-brother.
It was going to be a disaster. I just knew it.
Working for Noah wasn’t half bad, but that was a bigger problem than him being horrible like his brother Jacob.
I started to feel something for him, my enemy.
His charming smile and the hard body wasn’t something that I could ignore forever.
I started to feel too much for my new billionaire employer.
Sabotaging my job so that I could be sent back to the factory where I came, I got what I wanted.
Noah sent me away and I was left with regret.
I had sabotaged my job, and Noah’s previous PA was missing.
I found her and then Noah took me back.
This time, we broke all the rules and fell in love.
It was forbidden, love. We both knew it.
He was a Royal and I was a Silver. It could never be.
But that didn’t stop me from melting into his arms and giving him anything that he wanted.

Noah:
Brenda was an old flame that I’d crushed on for years.
She never gave me the time of day.
Now, Jacob had sent her to work for me, while I looked for Laurie.
I wasn’t happy about it, because I knew that it would bring back all of the old feelings I had for her, the ones I’d pushed down deep.
Living with her, seeing her barely clad in the mornings was harder on my system than I imagined.
I wanted her even more.
Brenda betrayed me and I had to send her away for a time.
When Laurie was saved by her, I knew that I’d been wrong. About everything.
Brenda fell into my arms, and it went against everything.
It went against my Alpha and my brother.
I found myself talking to enemies, learning my brother’s secrets.
I soon knew that if Brenda was ever to be my mate, I was going to have to reach for the destiny that I’d always feared, as well as the confrontation I dreaded.
The two lovers find themselves on a mountain full of enemies, talking to a seer that knew the truth. Their love was one for the ages. It was destiny that had brought Brenda and Noah together, nothing less.