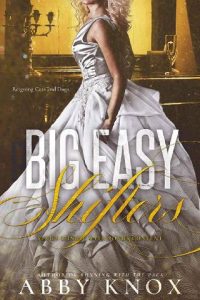 This bundle contains the complete set of the newly revised and updated Big Easy Shifter series (previously titled Her Big Easy Wedding, originally released in 2018) The complete story is told in five parts, each part dedicated to a separate couple’s story.

Part One: Taking the Belle
Ashton knows what he wants as soon as he sees it.
When the strange little princess in the dangerous dress walks in to his friend’s bar, Ash can barely remember his own name. He knows it’s a bad idea to get close to someone who doesn’t understand his wild-and-woolly secret, but he’s the breed of guy who mates for life. He doesn’t care who her daddy is and does not care how many gilded hoops he has to jump through. He’s gonna marry that girl and do whatever she says to get her down the aisle. Rosemary has got it all, except any desire for the kind of man her rich daddy approves of. She’s a hell cat who’s hell-bent saving herself for just the right down-home fella who can keep up with her. Ashton fits the bill perfectly. He’s a self-made man, tons of fun and mystery, and has latched on to her so fast they’re as cozy as peanut butter and jelly. Now. if everyone can keep their claws to themselves, they might just make it!

Part Two: Having His Cake
Vann West is a globetrotting celebrity New Orleans chef. He has everything from superhero good looks to a fangirl in every port. But now, he’s only got eyes for one female, and a powerful need for some Big Easy comfort food. GiGi DuGray a hardworking local cafe owner and pastry chef extraordinaire. A sassy little kitten with big dreams, she’s got no time for local golden boys, but always time to feed a hungry wolf that comes calling.

Part Three: Chasing the Night
The morning after … Chastity was on the prowl at her cousin’s bachelorette party, bound and determined to finally lose her virginity. Mission accomplished, probably, but she doesn’t remember much about the main event. Now, on the hunt for coffee and carbs, the de-flowered debutante’s walk of shame has her missing her mystery man at every turn. Gavin wakes up naked and alone in the woods, with vague clues and fuzzy memories of the one-night stand that unfolded after his best friend’s bachelor party. But this wolf does not do one-night stands. He’s determined to find this woman who rocked his world, and claim her for his own.

Part Four: Running with the Pack
Wolf shifter Bobby is a crowd pleasing party animal, but he’s only ever had eyes — and a nose — for his best friend, Pen. But a dark past has forced Bobby to keep his feelings at bay and simply do what he must to protect her. Unable to bear her perception of him as the monster he is, Bobby decides it’s time to pounce … or bounce. Pen wishes her best friend would make a move already. He’s spent so much time leaving her always wanting more. She had hopes that all of the wedding shenanigans would awaken the beast, but all the drama has sent him further into his dark place.

Part Five: Her Big Shifter Daddy
The patriarch of the most powerful shifter clan in New Orleans has a secret, all contained in a pretty, pink box hidden away in the closet. When Lionel and Betsy’s daughter uncovers the origins of how her parents met, the reading is intriguing, scandalous and heart-pounding stuff. What’s more, Rosemary discovers much about why her father behaves the way he does…the source of all of Rosemary and Ash’s wedding drama.