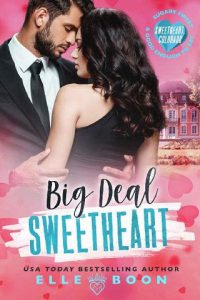 He was the type of man you were warned to stay away from.
She never was one to follow the rules.
Breathe in. Breathe out.
She can handle him.
The tension is so thick he can feel it.
He can handle her. Truly. Madly. All night long.
Nova Leigh has always been a go-getter, knowing she needed to prove her own self-worth without her parents backing. She has big plans, plans that didn’t include Mr. Big, and his too sexy for my shirt. No way was she getting involved with an older man who was sexy, rich, and a total asshole of the year. Okay, the last was her opinion, but this was her story, and she was sticking to it.
Keifer Sparks doesn’t have time for entanglements with a woman who is old enough to be his—younger sister. He isn’t willing to say she was young enough to be his daughter, he has a fifteen-year-old who is doing her damndest to turn all his hair grey.
From the moment they meet in Sweetheart Colorado, the little town where his wife had grown up, Keifer knew Nova was trouble with a capital T. Since his wife had passed away, he had kept his liaisons with women who didn’t want anything more than the pleasure he could give them. One look at Nova and he could tell she wasn’t like the women he saw in New York. However, fate had other plans in mind, plans that included a lot more than a one-night stand.