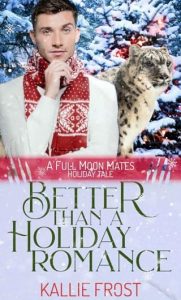 Alpha Wolf Stirling hates Christmas;it reminds him of the fated mate he lost in a tragic accident. So, when he arrives at a writer’s retreat in a castle that looks like something out of the North Pole, he steels himself for a miserable time… then he finds out he has to share a room too. But something begins to awaken within him that he thought lost with his mate. Could he be lucky enough to have found another?
Omega Snow Leopard Grant knows he’ll never find another true mate, but at least he can embrace the two wonderful children they had and do his best to make every Christmas as magical as possible. Maybe a wintry writing retreat in a romantic castle — with halls fully decked — will be just what he needs to find his muse again. He never expected to find an alpha who inspires him too.

Better than a Holiday Romance appeared as a short story in the M/M mpreg anthology “Special Delivery: Christmas” which is no longer available. This expanded version is twice as long as the original and includes two bonus tales (also from other unpublished Special Delivery anthologies) at the end.