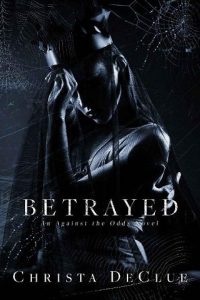 Betrayed (Against The Odds #3) by Christa DeClue – Free eBooks Download

Darkness lives inside all of us but for Delilah Santiago darkness is a way of life. She has spent her entire life living amongst monsters. Her life has broken her many times, but she’s finally decided that she’s had enough. She has decided to fight back against the real monster that has plagued her her entire life…The man who sired her and the entirety of his organization. The Santiago Mafia. You see she is a mafiosa principessa and she is about to betray the entire organization, because they betrayed her first. Can she survive through a betrayal of the very people who have threatened her with death her entire life? She doesn’t know who she can trust…until him.

Undercover DEA Agent Daniel Evers has seen some of the lowest of the low and been in extremely dangerous situations, but he has never jeopardized his case for anything. Until her. He has spent a year infiltrating the inner circle of the Santiago Mafia. Spending a year seeing and committing atrocities to make sure that when they took down the head of the organization, he’d be put away for good. But in a year’s time the evidence he has collected isn’t nearly enough. They need more information if they’re going to cut the head off the snake. The DEA needs her. The mafia princess. Delilah.

Can Danny and Delilah work together to make sure that the new drug the Santiago Mafia is marketing doesn’t kill any more people? With each move on her end monitored, will she be able to trust Danny to keep her safe? Or is it her time to die?