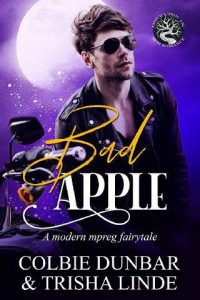 There’s no such thing as fairytales—until there’s a happily ever after.

When mob boss Nico Drakos dies, his son, omega Zane, knows the time is ripe for change. Just because all the mob’s business dealings have always been illegal, that doesn’t mean they need to stay that way. Zane is well-loved by everyone, and the council is ready to follow him wherever he might lead them. Time to put his business degree to work! The only person that stands in his way is his father’s second-in-command, Donovan Morelli.

Alpha Blaze was practically raised by the mob, groomed and trained to follow orders, no matter how dark. But, seething with jealousy, Donovan gives Blaze a command. One he can’t refuse. While Blaze keeps a wary eye on Zane, he falls under the omega’s spell. Then the alpha does the unthinkable. He defies his order.
Zane needs a safe place to hole up, but he doesn’t give a damn about his surroundings because the alpha everyone considers a bad apple lights a fire in his heart, one Zane is powerless to extinguish. With a memorable cast of supporting characters, this classic fairytale gets a modern mpreg twist.