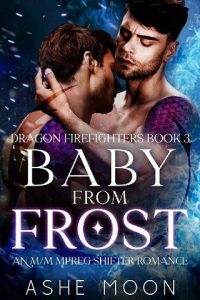 Fleeing from his dangerous dragon family, half-human omega Raka finds himself unable to control his desires for Delos, the winsome ice dragon alpha he hired to escort him across the frozen sea. But falling in love was never part of the escape plan. To protect them both, Raka vanishes from the flaming wreckage of their ship, leaving Delos behind with a broken heart—not knowing he’s carrying the alpha’s child.

After seven years, Delos’s icy heart shows no sign of thawing. On an away mission for his dragon flight brothers, he unexpectedly finds the omega he can’t forget. His resentment is matched only by his enduring need for Raka, but the omega is in hiding, unable to leave his library sanctuary. It’s clear they can’t have a second chance together—but then there’s Raka’s son, the boisterous little boy who looks so much like Delos. The child needs an alpha to teach him how to be an ice dragon—can Delos open his heart and become the daddy he was meant to be?