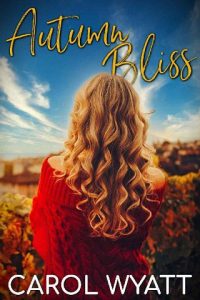 Her apartment in Chelsea had been featured in design magazines. She was among the city’s top 10 highest-earning real estate agents year after year, one of the best in the business.
But seeing her best friend, Eve, move on from their friends-with-benefits situation so easily and fall head over heels for a young architect left Wynn questioning the trajectory her own life was on.
At 48 years old, Wynn might have had it all professionally, but her personal life? A complete disaster.
After inheriting her father’s golf course more than a year ago, Wynn was finally ready to head back to her hometown in rural New Jersey and deal with selling the business.
Logan Fields hated this limbo she was in. She’d just turned 30 and after more than a year of grieving Rob Coleman’s death, she was still running his golf course, barely keeping it afloat, and there was still no sign of Rob’s daughter, Wynn.
Logan had googled her, calling her office in New York a dozen times, but Logan never made it beyond Wynn’s secretary.
Logan would love to stay and make a go of it as the official manager of the golf course, but things had to change.
Prices had to go up or staff had to be let go, but without any real authority, Logan didn’t feel like she could make those kinds of calls.
That autumn, just as Logan was ready to go to New York herself to find her, Wynn appears.
Just as unexpected as Wynn’s arrival is the news that she’s selling.
As Logan fights for Wynn to keep the golf course, she also fights her attraction to this seemingly ruthless and cold older woman.
Only an hour separates their lives, but Wynn and Logan couldn’t be any more different.
Wynn’s worth millions and Logan is on the verge of being homeless.
Wynn has written off romance while Logan’s certain the right woman for her will show up any day now.
Wynn is determined to sell the golf course along with the home she grew up in, but Logan wants to honor Rob’s legacy and keep it open for as long as possible.
The only thing they have in common is their unwanted attraction to one another.
Logan should hate Wynn, but with each encounter, she finds it harder to ignore that spark between them.
Wynn should be wrapping up this sale as soon as possible, except she’s found some kind of strange satisfaction in the way Logan looks at her and how the younger woman can so easily get under her skin.