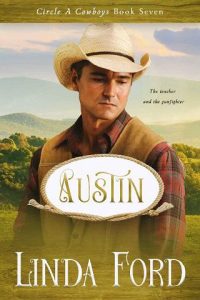 Austin Wagoner is a gunman on the right side of the law. As a deputy, he tracked down some bank robbers and in the following shoot out, his bullet killed Colin Martyn, the brother of Mae Martyn, the girl Austin was in love with. Knowing she would never be able to forgive him, he rides out of her life.

Five years later, Mae and her niece and nephew are headed to the new teaching position at the Circle A Ranch. Mae has had custody of the children since her brother’s death. His widow gave up on life and died shortly afterwards. Mae has had a number of teaching jobs but they never lasted. Too many parents and board members felt she couldn’t be impartial with children of her own in the classroom. She hopes all this will change at the Circle A. She didn’t know it was Austin who shot her brother and has nursed a broken heart at the way he rode out of her life.

Austin is headed back to his mountain cabin when he discovers a stagecoach being robbed and, to his shock, learns Mae and the children are on it. He is shot by one of the robbers and stays at the Circle A Ranch to recover. His attraction to Mae has never wavered but he doesn’t expect her to forgive him for killing her brother.

When Mae learns the truth about her brother’s death, everything she felt about Austin is challenged. Can she love the man who shot her guardian? Can Austin forgive himself?