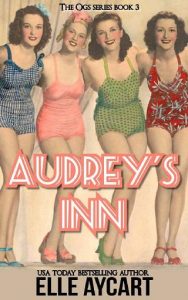 Audrey Fleming never had much of a family or place to call home, so when she gets the chance to buy an inn that once belonged to her late namesake, she doesn’t think twice. Never mind her lack of funds, connections, and experience.
For years, she and her roommate followed on social media the shenanigans of the OGs, three octogenarians who’d been besties with Audrey’s long gone maternal grandma. Au has yet to meet them, but she already loves them. Besides, the small town of Alden seems like the ideal place to lie low. No one would come looking for her in Massachusetts. She’d be safe, far away from Texas and all the ugliness and insanity.

Connor Stonewell, beloved grandson of Greta, OG extraordinaire, was once one of Alden’s Golden Boys. Now he’s a hot mess. He’d never envisioned a future where he wasn’t in the military, so getting discharged after a mission gone horribly wrong has left him adrift in a civilian world he doesn’t know how to navigate anymore.
He’s too dangerous to be around his fellow soldiers—never mind a certain sweet, sexy innkeeper he can’t seem to stay away from. He should stop playing with fire. Pack his shit and disappear for good. Too bad he can’t do it. Walking away from Audrey is something every fiber of his being refuses to do. Plus his dad and grandma are in a war path and need a referee, preferably one who won’t lose it at a drop of a hat and kill them both. So yeah, tall order.

Audrey and Connor both know their secrets will sooner or later catch up with them. Whether they’ll survive or crash and burn under the weight of revelation is anybody’s guess.