Home
contemporary romance
Auctioned to the Billionaire, Part One by Kelly Favor (ePUB) 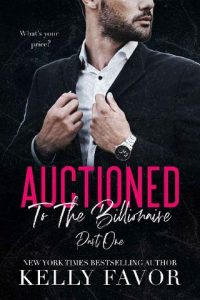 Auctioned to the Billionaire, Part One by Kelly Favor – Free eBooks Download

I’m totally innocent. Completely inexperienced in all the important ways.
And now I’ve been auctioned off to a man I’ve never met.
Billionaire mogul Dermot Nash is like nobody else I’ve ever encountered. He’s powerful and handsome, with a cold gaze that heats me to my very core.

But there’s so much about him that’s a mystery – secrets he will never reveal. And the way he makes me feel when he touches me can never make up for the fact that I’ve been purchased to be used as his personal plaything.
When he’s done with me at the end of the month, I’ll be discarded and forgotten. A disposable woman, something only the very wealthy can afford…

He can throw me away whenever he wants. And the more time I spend with him, the more I fear I’m falling for him, starting to love a man incapable of feeling anything.
And the worst part of it all?
His secrets can’t be anywhere near as bad as the one I’m keeping…