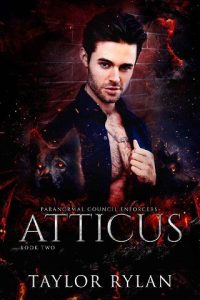 Hellhounds don’t have mates. But after a decade of denying his attraction to Brice, Atticus realizes the lion shifter is just that: his fated mate.

Atticus was banished from the demon realm well over a century ago when he could no longer do his master’s bidding. He had been many places but truly felt at home when he found Honey Creek. His attraction to Brice was unexpected, and when it became too much for him to control his beast, he left, leaving the lion alpha behind.
Brice wasn’t sure what the fates were doing when they gave him a human male for his mate, but he didn’t care. He just wanted Atticus and the life he knew they could have together. When Atticus left, never acknowledging their connection, Brice tried to make the best of what fate had gifted him.
When trouble threatens Brice’s sister and family, he rushes to New Orleans to help. While there, he makes a life-changing discovery about his missing mate. Atticus isn’t a human, and he’s never truly been gone. He’s now a council enforcer, and the hellhound is hell-bent on claiming his mate. But will Brice give in easily?

Atticus is Book Two in the Paranormal Council Enforcers series. Each book in this series will focus on a different couple, but these books are not standalones and should be read in order as there is an ongoing backstory that won’t be resolved quickly. This is a fated mate story in an MPreg world, but this is an alpha/alpha pairing and there is no pregnancy in this story. You should expect all the normal shenanigans, and remember that sometimes fated mates don’t necessarily understand what is going on.