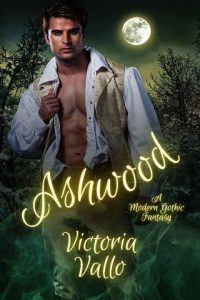 A bad breakup leaves Hart both homeless and unemployed. When he lands an interview for a special effects coordinator at Ashwood Manor, a much-anticipated gothic bed and breakfast, Hart can’t believe his luck. He’s spent years regurgitating tired special effects for haunted houses, and he’s excited about the opportunity to be more creative. The paycheck plus free room and board sweeten the deal even more, and that’s before he meets the handsome owner, who looks like he stepped right off the cover of a gothic romance novel.
Byron Ashwood has never been good with technology, so Hart’s skills and creativity are an answer to his prayers. After more than two centuries of avoiding long-term connections with others, Byron is ready to see his home full of people. He’s also excited about seeing Hart every day. When mysterious things start happening around the mansion, Byron confesses that he’s an immortal being who was banished from his own realm, and Hart refuses to believe him, thinking it’s all part of the gimmick of the bed and breakfast.
Soon enough, the evidence starts to pile up and Hart has to admit that something otherworldly is going on. He wants to run as far away as he can, but he finds he can’t leave Byron. This new version of reality scares Hart, but he believes he can face it as long as this mysterious, captivating man will stay by his side.