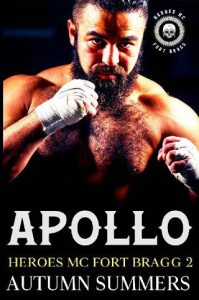 Apollo:
I live in constant regret!
She was the love of my life and I was so damn close to saving her…
But I ended up hurting her instead and now I have a hard time living with myself.
That’s why when I see the situation Paco put Zara in, I can’t take it.
I can’t leave her behind with a clear conscience.
I don’t really care what that’ll mean for MC business.
I bring her back with me, as a kind gesture, but then things start changing between us.
I really like her, but I don’t know if I can let her in to see the darkest, desperate pieces of me.

Zara:
I’ve been a slave since childhood.
Kidnapped at a young age and sold from one man to another.
Evil men are all I’ve ever known.
Paco was different, at least that’s what I thought until he blinded me and threw me in a cell!
The whole time in the cell all I could think about is that man who stood up for me when Paco blinded me with the laser…I could hear in his voice that he cared.
He eventually came back and helped me escape from Paco’s captivity.
He seemed like he really cared.
But, what if he was just like the other guys? Could I actually trust him?