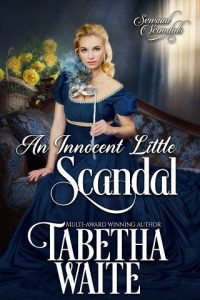 Lady Olivia Bevelstroke, the youngest of her half-sisters, has never cared much for the glittering social whirl of London. When her siblings decide to embark on a plan for independence without the strictures of marriage, they assumed she was just as excited about the prospect as they were—only she wasn’t. Olivia prefers the quiet solitude of her books, rather than the company of others, but she misses her father’s estate, Marlington Hall, most of all. There, she felt safe and loved and she is determined to return, whether it’s in the midst of a snowstorm, or if the new heir wants her there or not.

Miles Stone, the Duke of Gravesend, is a scarred recluse who wants nothing more than to leave his former life behind, as well as all the unpleasant memories that go along with it. The problem is the lady who has been on his mind ever since he pulled her from the freezing waters of the Thames and saved her life. When fate thrusts him into her path one winter’s night, he is determined to ignore the stirrings of desire within him—until he realizes she has no idea who he is. Not only is it a blow to his pride, but he finds himself reluctant to tell her the truth. When he introduces himself as the new footman to the new Duke of Marlington, they embark on an unlikely friendship. But will the lies that separate them destroy it all?