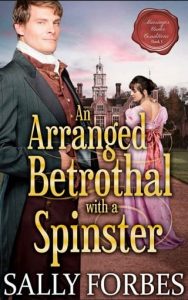 Rowena’s last courtship cost her a ruined reputation. She is now a spinster who has come to terms with the idea of loneliness and only a miracle could change this. How solvent could a bachelor’s proposal be?

Four years ago, Miss Rowena Whitworth made her debut in London’s High Society. She was whisked off her feet by the dashing and charming Viscount Mulington. But all was not what it seemed as the viscount was only courting her after having lost a wager. Rowena was left devastated and her anguish was only compounded by the scandalous gossip that ensued. She has vowed never to trust another gentleman with her heart. But her world is turned upside down when her father announces that she’s to attend the upcoming London Season. Rowena has no choice but to find a husband as her family is in dire straits, all thanks to her father.
Andrew Elton—Baron Elsbrook—has no desire to marry and carry on his family bloodline. He grew up with a cruel and calculating father which has only served to harden his heart. Unfortunately, Andrew’s mother is bent on playing matchmaker for him during the upcoming Season. Andrew encounters Rowena and they both agree to a marriage of convenience. But as Andrew gets to know Rowena he realizes that he has totally underestimated her.

Will they be able to overcome the obstacles on their way to getting their happily ever after?