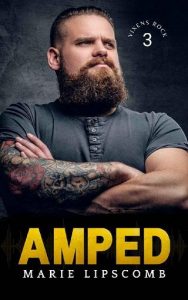 Liz Larkin never wanted to be a rock star. After almost a decade playing the keyboard for Vixen’s Wail, she’s desperate to pursue the career she always dreamed of. As a massage therapist, Liz could make a real difference to peoples’ lives, if only she could summon the courage to leave behind the world she knows. But when she collides with a big, bearded, ill-tempered, and irresistible roadie backstage at a festival, she sees a fitting end to her rock star life. Before she tells the Vixens she’s leaving, she intends to go out with a bang. What she doesn’t expect is to find love in the form of a grumpy roadie.

Jones has spent his life alone, hiding behind a sullen shield, priding himself on his unapproachable, fearsome façade. The physical pain he has suffered for years is nothing compared to the pain in his heart, but when Liz, a beautiful, curvaceous rock star, sees through his armor, he finds that the parts of himself which terrify even him, aren’t enough to scare her away. What begins as a quick backstage tryst unfolds into something far more devastating, and far more tender, than anything he’s ever allowed himself to feel.