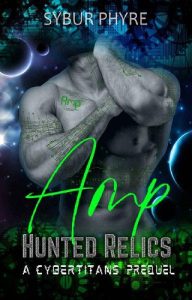 Earth has lost its battle against the Solcrue, even with the help of their finest creations: CyberTitans. The last of the human resistance is counting on Cara to rescue one specific unit: a Relic.
Amp can communicate with others throughout the galaxy with access to the galactic network tower on Hyperion. If he succeeds, there might just be hope for the rebellion. What he and Cara don’t count on is the desire between them. Humans are not allowed to love machines.
Cara: I’m just a secretary for the rebellion, not a soldier like my father or a cybersystems designer like my mother. I’m not cut out for performing jailbreaks, and definitely not of a mysterious, monster CyberTitan as the hacker model Amp. But he’s the earthlings’ only hope, and I want revenge.
Amp: I hate being locked in my cave unable to communicate beyond the confined walls of the decommissioning plant. Few of my brothers and sisters survived the Solcrue’s forces. We fought beside the earthlings who designed us. We were promised mates if we won. But the war was lost before we were made. A lucky few are scattered among the stars. The rest of us sort the remains of ships until the Solcrue wish to permanently end our suffering.
Cara: I’ve studied the angles of his angry face for nearly a year yet never noticed the vulnerability in his eyes until he stared down at me as he does now. No earth man could compare in height, musculature, or how he makes me want to touch him and know exactly what is metal and what is flesh.
Amp: My ultro motor races at the first glimpse, but she’s dressed as a Solcrue decommissioner. Mother Besha always told us we could learn to love someday, that we would know our mates the moment we laid eyes on them. But I cannot comprehend what I’m seeing. It can’t be her, and yet I can’t help but crave a taste of her lips. I need her, like I need out of this place.