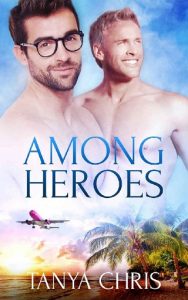 If you’re going to fly into the path of an oncoming hurricane, there’s only one man you want as Captain: ex-Air Force pilot, Rook Terzi. But why would you do ever do such a thing in the first place? This definitely isn’t the smartest decision Rook has ever made, as evidenced by an abrupt landing on the wrong side of Coxa de Peru, but being marooned isn’t all bad. In fact, it would be almost paradise if it weren’t for one particular passenger: YouTube personality and alpha-wannabe, Bryce Norris.

Bryce figures he’s the best choice to take charge of this group of survivors. He’s a paid adventurer, after all. Sure, his production manager usually handles the details, but Bryce does his own stunts, and he’s ready to sacrifice his body in any way necessary. Too bad no one’s asking him to play hero, because he’s well-equipped for the job.

When a crew member’s declining health means they can’t wait for rescue any longer, Bryce and Rook need to stop fighting for dominance and start cooperating on a jungle trek towards civilization. Can their rivalry turn to passion beneath a tropical moon?