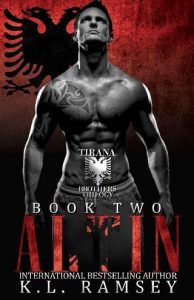 Altin Tirana was nowhere near ready to become the head of his family. After his oldest brother was lucky enough to escape their father, Altin accepted the position as the Tirana Syndicate’s head. He was hoping for more time to be carefree in America. He oversaw the syndicate’s American holdings, but now, with his brother’s renouncing of his family ties, and his father’s failing health, he has no choice but to return to Albania. The only problem was that he had to take a pesky, sexy syndicate associate back home with him. His father wasn’t going to like the fact that he was bringing home Blake Reid, but it was his only chance to prove to her boss that Altin was competent enough to deliver the weapons he purchased.

Blake Reid was up to her eyeballs in mafia hitmen and there was no way that her boss was going to let her out of her assignment now—not that she’d ever want out. Bringing down Jeffrey Milborne was all she had thought about since he killed her father when she was just a girl. She never dreamed she’d be able to bring down two major crime families when she took the undercover case, but karma was smiling on her. There was no way she was going to pass up on her good fortune and let Altin Tirana go back to his family in Albania. If this coup d’état was going to work, Blake was going to need to dust off her passport and go to Albania with Altin, whether he liked it or not.