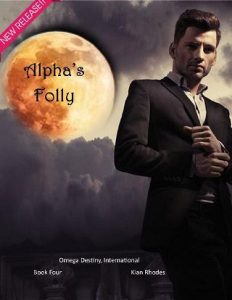 There are some days that one simply doesn’t live long enough to forget. For Bari Herschel, the day he lost his heart to a dashing young Alpha was one of them. An outcast in their village, Bari couldn’t believe his luck the day that Ahearn Walsh led him into a hollow thicket to take the Omega as his own. After seventy years of married bliss -a drop in the bucket when you consider the lifespan of dragons- a freak riding accident threatens to strip the dream away.

Ahearn woke trapped in his frozen body, his memory shattered, unable to move or speak. Unable to alert the hospital staff that the pregnant Omega playing the doting husband was a fraud. A fraud who carried babes that were most definitely not of Ahearn’s line. When he finally broke free of his invisible bonds, Ahearn would learn that the Omega had infiltrated every aspect of the his life, but when he tried to remove the Omega from his home and his life, the situation became… complicated.

“Rise,” The Prince of Dragons barked, his eyes flashing angrily as he took in the Alpha before him. “Ahearn Walsh, son of Advim, at the beginning of this hearing, your surrogate demanded settlement in the Teren de Dragoni Sovereign Court. Per the laws of our homeland, you would be charged with abandonment of the Omega in your care and endangerment of the lives he carries.”
Ahearn swallowed hard. “I willingly submit myself for your punishment.”