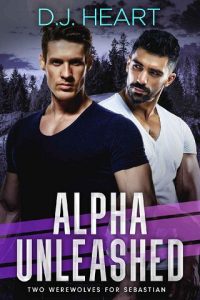 What do you do when a cocky alpha werewolf picks you to be his mate?
Sebastian’s first instinct is to run for the hills. His second is to wish that Viggo had asked him on a date like a normal person. He would have said yes in a heartbeat.
But this is what he signed up for. He took the cash from the werewolf mating program, knowing that he was risking his freedom, and now the consequences of that decision have come back to bite him in the ass.
Literally.
He’s surprised by how much he likes it.
Viggo is the very pinnacle of a werewolf alpha–tall, dominant, and built like a Greek god–and the way he touches Sebastian makes him feel like he’s going to combust.
The way he tells him that Sebastian is the one he’s been waiting for makes his heart flutter and his stomach clench tight.
There’s just one problem. Viggo comes as part of a package deal, and his other half is a feral alpha named Bjorn who likes to chase bunnies, cuddle, and strut around looking like Tarzan’s scary older brother.
Viggo claims that together he and Sebastian can fix Bjorn–that they can soothe his wolf and put his human half back in the driver’s seat–but Sebastian is far from sure he’s up to the task. He wouldn’t even know where to begin.
He decides to try anyway.
After all, how hard could it be to tame a werewolf?

(This 120k word MMM paranormal romance features a dominant alpha, his cuddly six-foot-nine mountain of a mate, and an adorable second-grade teacher who may or may not be the solution to all their problems. The story contains rough sex, domination, bondage, muscle worship and uniform kink. It has a HEA and no cliffhanger.)