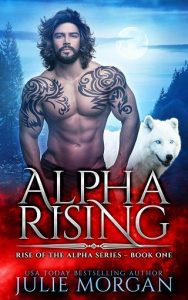 A fated meeting changes everything…

Killian Blackcrown wants nothing more than to leave the family legacy behind him. From the abusive ways of his father’s ruling, to the countless lives that were taken simply because they were deemed unworthy, Killian won’t run a pack that way. He renounces himself from the role of Pack Master and becomes a lone wolf. Unfortunately, it’s not that easy and his past will eventually catch up.

Cordelia Golden will not be forced into a loveless marriage. The magic that ascends the next Alpha may only pass to the next male heir—or in her case, her chosen mate—but she knows her fated mate is out there and she intends to find him. If she doesn’t, she faces a life sentence of servitude to an unwanted suitor.

Cordelia stumbles upon Killian and the two collide in a battle of wills, but when two pieces of a broken soul become one, nothing can tear it apart. Unfortunately, the evil is calling from Killian’s old pack and it’s out for blood. He is about to face the ultimate battle, Alpha against Alpha, and he can’t afford to lose.