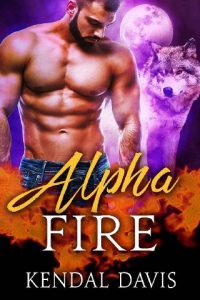 She longed for the sizzlingly hot wolf man to claim her…
…not knowing that she was the only one who could save his pack from destruction.

Jodie Winston came through the little town of Yardley like she did everything; with a single-minded focus on her work. She knew some people thought she was ruthless, too sharp when it came to closing a deal. Whatever. She had everything she needed.
Sam Tate was the lead enforcer of the Yardley pack, determined to control any threat that came near his woods. But he couldn’t explain the wild heat that rushed through him every time he laid eyes on Jodie’s curves, unless…she was the mate he had longed for all his life.

She was an outsider.
The pack was failing. Without the loyalty that should have been at the heart of the community, anger and divisiveness reigned.
Jodie could change everything with her secret fire. Sam was certain she was the one.
She had the potential to become the flame that kept the pack together. If another wolf sought to destroy Jodie, Sam would defend her with his life.

Sam Tate would do whatever he damned well needed to do to protect the woman he loved.