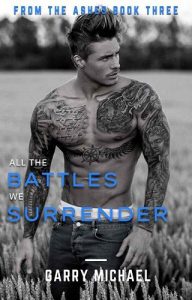 Time. That was what Sawyer Montgomery thought he had until he realized that it was running out. Now, all he wanted to do was right a wrong from three years ago. He made a vow to spend what little time he had left with Hawkins, the only man he ever loved. He would try everything to penetrate Hawkins’ armor before it was too late.
Time. That was what Jace Hawkins needed more of to forget his estranged husband. But after three long years, Sawyer showed up at the Alaskan home where they had promised to spend the rest of their lives together. The anger he thought he’d feel at seeing Sawyer again was nowhere to be found. Instead, it was replaced by an overwhelming fear of losing his lost love forever.
One man is battling to save his life, while the other fight to protect his still aching heart. To which battles are Sawyer and Hawkins willing to surrender?

All the Battles We Surrender isa story about second chances and valuing what everyone wishes for near the end. Time.