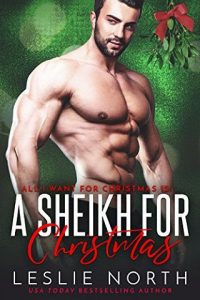 A Sheikh for Christmas
It may be cold outside, but the snow begins to melt when an unlikely couple comes together during the Holidays…
Christmas is right around the corner, but after creating a society scandal, New York heiress Melody Hascall-Ebons has nowhere to turn. Cut off by her family for running away with an actor—who turned out to be using her for publicity—Mel is penniless, homeless, and disgraced. There’s only one place to go, and that’s back to the fiancé she ditched. But instead of her ex, she finds his friend Daveed Rafik. The handsome military translator disarms Mel with his easy smile and surprising sympathy. But as she struggles to get her life on track, the last thing Mel needs is to fall into the strong arms of her ex-fiancé’s best friend.

Counter-terrorism expert Sheikh Daveed Rafik has spent his career dealing with delicate and dangerous situations, but none of them compares to Melody Hascall-Ebons. He’s supposed to be helping his friend Murphy find his missing sister, not consoling the spoiled rich girl who dumped their buddy Heath. But the more he learns about Melody, the more he likes. With her unexpected intelligence and distinctive beauty, Melody calls to him in powerful ways. But when the woman he is arranged to marry shows up, Daveed’s highly organized life suddenly gets very complicated.

The streets of New York are steeped in holiday cheer, but can Daveed and Melody thaw the ice around their hearts enough to make room for love?

A SEAL for Christmas
It’s Christmas in New York, and the lone wolf is about to go AWOL for love…
Navy SEAL Murphy Coen should be celebrating the upcoming holidays with friends and family, but with his sister Aileen missing, there’s not much for Murph to feel thankful for. To find Aileen, he’s fully prepared to use force, until an unexpected encounter has him rethinking his tactics. Shayma, his friend Daveed’s former fiancée, is sexy as hell, and something about her soothes his wayward soul. The brunette bombshell claims she can help, but Murph’s never been known for his patience. The clock is ticking, and he isn’t sure Shayma won’t get in the way of doing what he needs to do.

After ending her engagement to the man chosen by her father, Shayma bint Amr Kahlan has been enjoying the sights of New York City…and her ex’s best friend Murphy. The menacing military man has the dark, brooding thing down, but Shayma is certain his temper will lead to trouble—trouble his friends don’t want him in. When Daveed offers to promote her father if she can keep Murph in check while he and Heath secretly search for Aileen, Shayma sees a chance to help…and get back in her father’s good graces. She’s happy to prevent Murphy from getting out of hand. Besides, sometimes it takes a softer touch to get what you want.

Shayma and Murphy’s chemistry may be undeniable, but as the stakes get higher, can Murphy open himself up to love? Or will he be forced to choose between Shayma and finding his sister?

A Billionaire for Christmas
Snow is falling in Central Park, but this Christmas is going to be hotter than ever when a smart-mouthed journalist unravels a tightly wound billionaire.
When billionaire businessman Heathcliff Goldwin III returned home for the holidays, he never expected to be at the heart of a New York society scandal that thrusts him into the spotlight.

Attention is the last thing Heath wants, so when he learns his friend Murphy hasn’t heard from his journalist sister, Heath sees the chance to lay low and repay a debt to Murph. He’ll locate Aileen, keep her safe, and the whole scandal thing will blow over. But when he finds the petite brunette disguised as Santa and tailing a shady senator, Heath knows she’s in over her head. He should just tell Murphy where Aileen is and move on, but he’ll give her the chance to get her story…even if it means not letting her out of his sight.