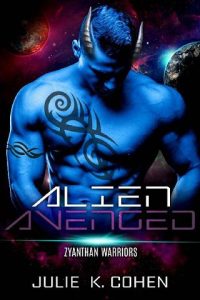 No way back to Earth. No ability to speak. Just one warrior who loves her for who she is…

Lucy (Chloe):
After being sold to slavers and getting caught up in a planet’s invasion, Lucy just wants to be left alone. She’s come to Affinia to heal, to find that part of herself she lost since leaving Earth as a mail order bride. But she’s trapped within herself. She lost her ability to speak and she never learned to read or write, thanks to the strict coalition rules on Earth.
As Lucy tries to deal with her fears and frustrations, she catches the eye of a handsome zyanthan warrior. Melikk is sweet, smart, and understands her even though she can’t speak. She longs to talk to him, to get to know him better, but first she needs to find her voice… and her courage.

Melikk:
Melikk lost a part of himself when his sholani and unborn son were killed during the war. While planning to avenge their deaths, he meets Chloe. The human female who hides in Makov’s barn has been traumatized by slavers. She cannot speak and she fears males, but her rare smiles and guarded glances make him feel alive again. But a male can’t have a second sholani, can he?
When Torin wants to use Chloe to lure dangerous slavers, Melikk has to choose between love and duty. He has already lost one mate, he will not lose another, even if the fate of his world hangs in the balance…