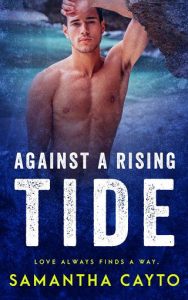 Against a Rising Tide by Samantha Cayto – Free eBooks Download

Scott, a Navy SEAL, returns to his childhood beach house to deal with the emotional trauma of his latest mission. When a sniper killed his closest friend, Scott was left dealing with survivor’s guilt and the disturbing feeling that his friend meant more to him. He has always identified as strictly straight, attraction to men being something he has ruthlessly suppressed.

When he finds Kitt, a friend of his sister’s, hiding out from his abusive boyfriend, Scott is once again drawn to someone of his own gender. Although annoyed at the intrusion, Scott also instantly develops an interest in his unwanted houseguest. Keeping his distance is proving to be impossible and his growing desire for Kitt cannot be ignored.

Forced to leave home, Kitt entered into a relationship with a man who turned abusive. Having finally found the courage to escape, the last thing he wants or needs is another alpha male invading his space. But having nowhere else to go, he ends up staying with a man who disturbs him in more ways than one. As scary as the SEAL is, Scott is exactly the type of man Kitt dreams about.

The beach house is small, and the two men cannot avoid one another or the attraction between them. With each passing day, their bond grows stronger. Hesitation slowly gives way to passion. They need to trust their feelings and let go of the things that frighten them, to find safety and solace in each other.