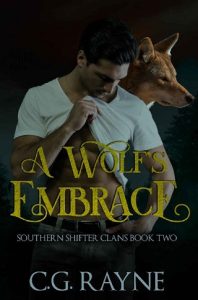 Rogue lion shifter, Reece, only wants a fast escape from the lion Retrievers sent by the Alpha-Prime of his clan when he’s cornered in a small Texas town after three years on the run. He never imagined an enemy shifter would become his unwitting savior, an Alpha red wolf driving down the interstate that heats his blood in more ways than one. In exchange for sanctuary, Reece offers the wolf a deal he hopes the Texas shifter clans won’t be able to refuse. He’s just so tired of running.
The catch is Reece only has until they reach the next town to convince the wolf of his offer’s value—or the Retrievers catch up to drag him away to suffer an unspeakable fate.
The wolf is just a means to an end, a messenger, with a history of lifelong hostilities between their clans, so why can’t Reece stop looking at him and longing for something they would both have to be insane to even try?