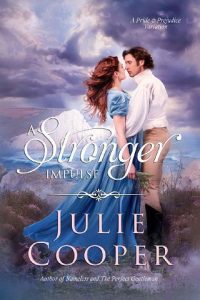 “…and in his behaviour with me, there were stronger impulses even than pride”

FITZWILLIAM DARCY IS ENRAGED when, already reeling from Elizabeth Bennet’s disdain, he discovers his sister locked in a passionate embrace with George Wickham—and suffers an apoplexy at the sight. With proper speech locked uselessly inside his mind, his Fitzwilliam relations are quick to take advantage of the situation, calling his illness insanity, and scheming to keep both Darcys under their control.

ELIZABETH BENNET IS EXPELLED from Longbourn after she refuses Mr Collins’ serious proposal and Mr Darcy’s mocking one. Always the least favourite child, she is expected to deliver herself up to an unknown uncle in London, from there to be placed into service. A fortunate escape takes her to Ramsgate instead…but it is only a brief reprieve before she must find a new life for herself.

TWO AGAINST THE WORLD. How can two powerless individuals forge a defence against the formidable forces arrayed against them? Darcy cannot afford to indulge himself in a marriage that would prove his relations’ opinions of his sanity. Elizabeth must protect herself against a growing but impossible love…and yet, a stronger impulse urges them to stay. To fight. Together.

A Stronger Impulse is friends to lovers re-imagining of Jane Austen’s Pride and Prejudice that will be enjoyed by fans of regency romance.