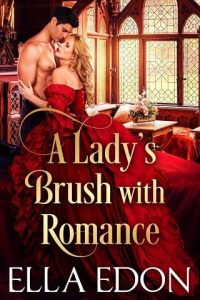 Her siren’s call is a lethal temptation, but he can’t resist her charms…

Cecilia Wallace’s world is shattered when she is forced to raise her sick brother alone. Desperate to save him, she turns to a ruthless moneylender, only to find herself a pawn in his manipulative games. In a stroke of cunning and as a final attempt to free herself, Cecilia turns to canvas and brush, using her talent to create a breathtaking masterpiece she will claim is the work of her famous, deceased father. And what better way to set the art world further ablaze, if not to transform herself into the very Nymph of the painting?
Ezra Spencer, the Duke of Marlborough, has known great sorrow. After the tragic loss of his wife and child, he found solace in the timeless beauty of art. Drawn to its immortal allure, he has dedicated himself to collecting rare and exquisite pieces. Until, one day, he encounters the mystical Nymph, calling to him like a siren yearning to possess his soul. Due to this very encounter, he eventually meets Cecilia Watson, the owner of a lost painting by the illustrious Thomas Wallace. As he works to uncover the secrets hidden within the brushstrokes of the masterpiece, a fiery attraction burns between them.