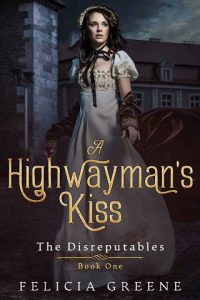 Criminals, con men, tricksters and toughs; five men who dwell in the shadow realms of Regency London live with risk and reward as a matter of course. While adept at all the scandalous arts necessary to conduct daring robberies or build illegal empires, love has never been part of their repertoire–until five daring, spirited women show them that a heart is the only thing worth stealing…

Abigail Weeks has to escape. Living with her cruel father and ineffectual mother is one thing, and painful it is too–but being forcibly married to one of her father’s business associates is very much another. With traditional avenues of escape cut off to her, Abigail is beginning to feel hopeless… but when a truly drastic situation presents itself in the form of a highwayman robbing their family coach, she sees a sudden and unexpected way out.

Marcus Brookes, bored duke by day and perilous criminal by night, was expecting to rob an entirely different coach–and he certainly wasn’t expecting a woman to throw herself into his arms and beg to be kidnapped for a price. It’s a development that complicates his life considerably, both as a duke and as a highwayman, but there’s something about the woman that makes Marcus want to do whatever she says. Soon she’s making herself at home in Marcus’ highwayman’s lair, developing opinions about his manner… and through some strange magic, making Marcus feel absolutely infatuated.