Home
Paranormal / Sci-Fi
A Hacker, Vampire, and Chimera Walk into a Bar… by RK Munin (ePUB) 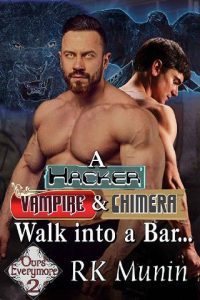 A Hacker, Vampire, and Chimera Walk into a Bar… (Ours Evermore #2) by RK Munin – Free eBooks Download

Covered in tattoos with a head of bright turquoise hair, Briar Thorn Lis likes to pretend she’s untouchable. She’s got her small group of close friends, so who cares that she doesn’t date? It’s not like she plans on having kids anyway. And her life is full of helping and protecting her “chosen” family.
Except there is a guy. She’s never met him, and she’s almost 100% sure he isn’t human, but the sound of his voice makes her feel things. And here she thought all those pesky emotions like romantic love were locked down tight. But the guy named Memphis that lives up in Oregon makes her want to lower her shields and invite him in.
All the strange feelings she’s developing mean that when she stumbles across a vampire in desperate need of help, the only person she thinks to call is Memphis.
For his part, Memphis Granger has given up on the hacker he lovingly calls Baby Doll making the first move. They’ve flirted over the phone for almost a year, and he is losing patience. As a Chimera, Memphis knows the moment he hears Briar’s voice that she is his mate. Her filthy mouth, penchant for physical violence, and less than legal occupation does nothing to deter Memphis. Hell, if anything, it makes him want her even more.
The problem is convincing her that they could have something real. When she calls him for help with a vampire, he jumps at the chance to meet her in person. Besides, his best friend is a bloodsucker, so he’s got plenty of practice dealing with a fang-face. How much trouble could a starving and confused vampire be?
When Tobias Becker was lured into a trap by his greedy business partner, he expected to die. But that didn’t happen. Instead, he’s left to languish alone in a room bound by powerful magic. He has no idea how much time has passed, but when he’s roused out of his unnatural sleep, it’s to find the face of a colorful angel staring down at him. Instantly, he knows she is meant to be his flock, a lifelong companion that a vampire shares his soul with. He’s weak and possibly insane from such a long hibernation, but he knows better than to let go of this woman.
When a leather wearing, rough looking Chimera shows up with ties to his angel, Tobias decides that there is always room for one more in his flock. All he needs to do is make these two understand that they belong to him now. How hard could it be?