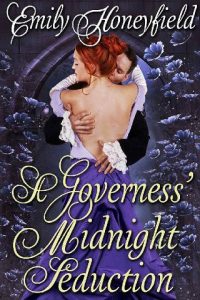 The tempting Anne who works as a governess, is too smart for her own good and eternally passionate about the education of the children. When she first meets Robert, the mysterious new employee of the estate, she finds her mind and body unable to resist their overwhelming connection. He’s handsome and seductive and as it turns out… a rather colossal liar. Still, his appearance is so scandalous that she feels herself abandoning her traditionally stoic nature. Laughter, romance, a youthful passionate affair… Is it too late for her to have all of these? Is Anne destined to experience the flaming passion she secretly dreams of?

As an illegitimate child, Robert Carlson might be sinfully handsome and confident, but he is also entirely aware of his restrained position in the world. At a young age he is forced to seek refuge as an employee in his brother’s estate, desperate for a place to call home. Hidden away, he finds himself at the mercy of his position and soon tempted by the ravishing governess. They slowly build a sparkling friendship, one that inevitably guides them towards burning desire. Soon, Robert’s quest for anonymity is foiled by the horrible appearance of his sister… As his identity is pinned down, he must face the consequences of his past actions and pray that Anne won’t resent his deception. Can this dazzling Lady overlook his lies and give meaning and fiery colour to his lonely life? After everything he’s been through, could Anne be the home he’s searched for all these years, one outside the bounds of title or wealth?

When a seed of an illegitimate affair and a seductive governess meet, the temptation is irresistible. Even though the burning attraction is undeniable, there is still a long way to go for them to fully tame each others’ hearts and bodies. With a burdened past and Robert’s sister threatening their growing romance, Anne and Robert will have to fight with all of their powers to remain together. Will they be brave enough to go after the flaming love they deeply desire? Can these two wandering souls make this sizzling and built on lie affair last after all?