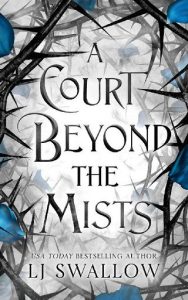 A Court Beyond The Mists by LJ Swallow – Free eBooks Download

Never trust those from beyond the Mists.
Twenty years ago, Talia’s father believed he’d made a bargain with the fae. But the fae’s trickery cost the human king everything—the queen’s life and their daughter’s freedom. Since that day, Talia has lived in a hidden court surrounded by thorns. Now, only marriage to a human prince will end the princess’s exile and allow her to rejoin the kingdom.
Unless the fae reclaim her on the day that the roses bloom.
Three years ago, a seer whispered a prophecy to a fae prince. If Jaren returns the girl stolen from the fae, he’ll secure his throne. But when he finds Talia, Jaren discovers the seer didn’t tell him everything about the hidden princess. Talia’s silver scars aren’t only from the thorns that surround her prison—the marks hide a dangerous secret.
Once over, the humans and fae lived in harmony until the kingdoms became threatened by fae magic and they declared war on the fae. In response, the fae created the Mists to divide two lands. Humans who step beyond the Mists never return. Fae who walk through are killed on sight.
The handsome and deadly fae captures Talia’s heart of thorns and frees her from the shackles of her kingdom. Jaren knows that if he crosses through the Mists with Talia and returns to his court, her life is at risk. But if she stays in the human kingdom, he’ll lose the princess who must become his queen.
And Jaren isn’t prepared to let her go.
Can the bond between Talia and the man with dark secrets bring her the life and love she desires? Or will the fae prince’s deadly ambition destroy them both and bring destruction to the fae realm?