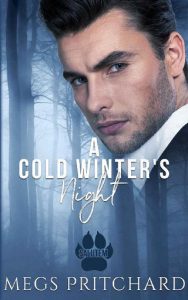 Can Clarke convince his mate to accept him, or will he lose him before he has the chance?

The falling snow was the first hint that Marco Gomez’ weekend away with friends might not turn out how he expected. The bear coming into their campsite was the next. The third was the man who came to their rescue. A man who would change the course of Marco’s life.
When Clarke Sterling heard the bear, he wasn’t concerned. He was in the woods after all. The whimpers of fright however weren’t expected. Saving three men from the bear infuriated him–they had signs posted to prevent this from occurring–until he caught the scent of his mate.
Staring into the eyes of his saviour Marco felt an undeniable attraction, one he was more than happy to explore until he Clarke told him exactly who Marco was to him. Marco knew all about shifters and mates and wanted nothing to do with it. He had his future planned and it didn’t involve a mate.
But the separation haunted him. A long distance relationship developed until the scientist found Marco. Reacting in fear and anger Marco ended their relationship leaving Clarke shattered at the loss of his mate.
Could they bridge the gap between them and could Clarke keep his mate safe now the scientists knew about him?